Posted on September 8, 2012 by Christopher Eng

[Chris posted what is below; I snuck in to add photos and retitle the entry so that it better reflects the work he did…blog administrator’s prerogative.  KC]

J. Jack Halberstam’s work continually challenges us to imagine alternative ways of living, thinking, being, and wanting. This is no different in The Queer Art of Failure. 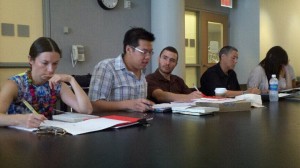 Writing in his distinctive style that effortlessly combines elegance, humor, sophistication, passion, and intellectual generosity, Halberstam calls for a critical reconsideration of failure: as a queer art, as anti-disciplinary historiographical method, as a politics of disorientation, as struggle, and as a creation of alternative worlds. In a way, the various texts we have here today participate in this project.  In dialogue with one another, they manifest the formation of solidarity that the Invisible Committee articulates, one that coheres around points of resonance, opening up possibilities for thinking and strategizing through the generative multiplicity of failure.  Let us trace some of these resonances.

1) The Rhythms and Temporalities of Success and Failure

We are invited to explore how the order of things materializes through rhythms. The Invisible Committee reframes “Empire” as “a rhythm that imposes itself, a way of dispensing and dispersing reality. Less an order of the world than its sad, heavy and militaristic liquidation” (13). Halberstam illuminates how these rhythms—its concurrent ordering and liquidation of worlds—keep beat with the temporalities of success and failure, imposing narratives about ways of living, defining the parameters of what is possible or impossible, desirable and undesirable, good and bad.  “Practicing failure” then insistently questions how these temporalities work to uphold material conditions of inequity and construct arbitrary criteria for belongingness. As Halberstam proposes: “The queer art of failure turns on the impossible, the improbable, the unlikely, and the unremarkable. It quietly loses, and in losing it imagines other goals for life, for love, for art, and for being” (88).

2) Figurations of Failure and Conditions of (Un)belonging

Secondly, these texts connect the imperative to “imagine other goals” by mobilizing failure as a historiographical method.  Collectively exploring “an archive of failure,” they follow Halberstam’s provocative inquiry: “what happens when failure is productively linked to racial awareness, anticolonial struggle, gender variance, and different formulations of the temporality of success” (92). Seeing the capitalist economy as the producer of crisis, this archive refuses the criminalization and pathologization of the dispossessed, the poor, the racialized, and the unemployed as perpetuated under narratives of success and demands of individual responsibility. Fatima El-Tayeb challenges the myth of racelessness that constructs a “white” European identity, arguing that “ethnicization” is a tool of differentiation that figures Europeans of color as perpetually migrant and alien. For those figured as failure, performing citizenship is not enough when they are predetermined as those who do not belong, the foreign threat to a putatively raceless, white European identity. These forms of estrangement project them as the failures, the delinquents in opposition to citizenship that must be dealt with. How do we dismantle this fantasy projected by the lure of citizenship and belonging? How do we reject the desire to be the proper, good citizen when it is an ideal position of privilege secured against the chronic precariousness of others?

3) Negativity and the Antisocial— Politics versus the Political

These pieces caution against the dangers of concretizing identity in efforts to claim belonging and garner state recognition.  At a talk last March, professor Halberstam urged us to keep queerness within its disorientation by refusing to let it settle as a knowable identity based on sexuality. In re-examining the career of Gabriela Mistral, Licia Fiol-Matta precisely shows the dangers of a celebratory claiming of sexual difference, charting the unheroic histories in which queerness as identity becomes complicit with projects for state nationalism, which resonates with current discussions of homonormativity, homonationalism, and pinkwashing. We need to reject intelligibility, embrace failed citizenship, to keep queerness in disorientation, mobilizing it as not identity but politics. The task of negativity and the antisocial turn within queer theory then, Halberstam argues, is not to turn away from politics, but rather reject the terms by which politics has been and is sustained.  He argues: “Negativity might well constitute an antipolitics, but it should not register as apolitical” (108). In facing the rhetoric of austerity that demands that we all suffer, the demand for work and productivity until the body literally wears away, when precariousness is a systemic condition of being, how can we harness feelings of anger and rage to channel the practices of “self-shattering” and “other-shattering” as both political and ethical strategies for survival (110)?

How can we allow for the openings and conditions for such shattering? El-Tayeb tracks how Europeans of color shatter the differentiating tool of ethnicization through a radical queering of identity that is postethnic.  Assembling through resonant experiences of alienation, these groups come together to make the uninhabitable 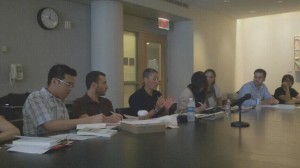 spaces to which they are consigned livable. They participate in cultural practices and activist projects that challenge the structural conditions undergirding differential outcomes of success and failure. The thoughts and actions performed by these figures of failure— the delinquents, the protestors, rioters, scholars, and activists—are immensely threatening indeed, for they reveal “[t]hat an act could have made sense according to another consistency of the world than the deserted one of Empire” (17). Professor Halberstam illuminates how and why queer theory should be committed toward these other consistencies. In his words, a queer theory that foregrounds failure is one that chooses to reject the safety net of institutionality in favor of taking risks and creating openings. It acknowledges the need to fail to follow disciplinary protocols in order to make other rhythms possible. There is a need to reject politics proper and engage on our own terms, to protest the insufficiency and violence of “rhythms of life” orientated around empire, family, and work, and that measure individual success or failure based upon the ability to conform to these rhythms. These are the possibilities we see in alternative cultural and disciplinary practices, community formations, struggles, affinities, and spectacular inhabitations of failure. Collectively, these texts invite us to think through the following assertion behind The Coming Insurrection: “In reality, the decomposition of all social forms is a blessing. It is for us the ideal condition for a wild, massive experimentation with new arrangements, new fidelities” (42).  How can we use failure to collectively imagine new arrangements and fidelities both inside and outside academia?  How may the project of revolutionizing American Studies participate in creating the spaces for such “massive experimentation”?

This entry was posted in events. Bookmark the permalink.
Need help with the Commons? Visit our
help page Send us a message

Built with WordPress | Protected by Akismet | Powered by CUNY